Contribute to a Sustainable Environment at Your Own Pace

While most people are aware of the importance of environmental preservation, many are not sure where to start. We at Mitsubishi Electric considered how we might work together with people who want to take some kind of action. And we came up with an event that can produce a significant effect today with just a little effort while sowing the seeds for a greater contribution tomorrow—we call it "Run for Eco." 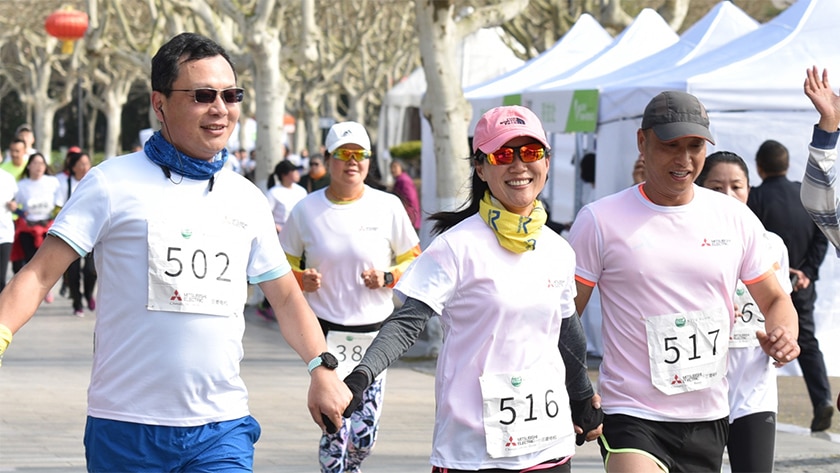 Uniting Many to Move Toward a Shared Goal

Over the past several years, the term "PM2.5" (PM two-point-five) has become very widely known, particularly to people in China’s major cities. It is particulate matter that not only obscures the view, but over time can do serious damage to the body.

Running is an extremely popular means of exercise as it does not require advanced athletic skill or training, nor a significant investment in equipment. It is something most people can do, and this is what makes Run for Eco such a great way to get people involved.

Run for Eco participants are selected through a lottery. And, in addition to actually running, people can contribute by playing two specially created Run for Eco online games. The points players accumulate are transferred to eco points, which are then converted into a monetary figure and become part of the donation made by Mitsubishi Electric to the China Environmental Protection Foundation. 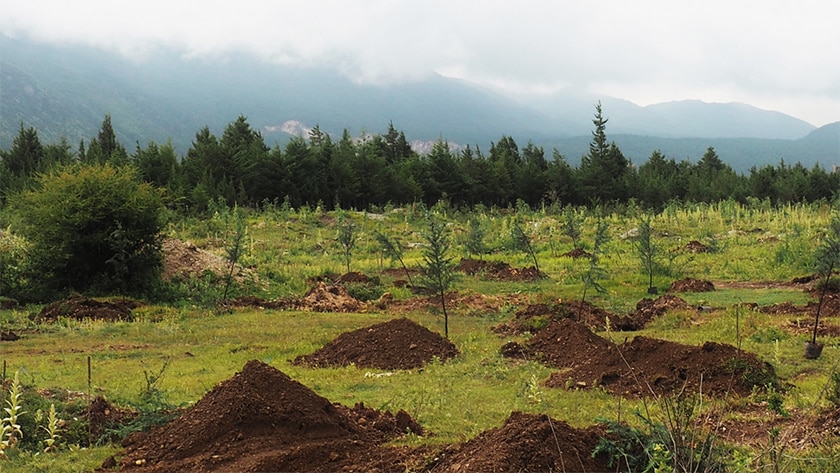 A Forest Begins with a Single Tree

The 2019 edition of the race took place on March 23 at Shanghai’s Century Park. Each runner wore a distance-measuring chip attached to their shoe. Based on the distance they run, each runner earns points that are converted to a monetary figure. In 2019, the Run for Eco event and online games together resulted in a total donation of 151,225 yuan (about 2.4 million yen or US$22,000). The funds go to activities such as tree planting.

Since 2015, when the race was first conducted, the number of participants has gradually increased. In 2019, approximately 80% of the slots were filled within a week of the notice being distributed.

Lu Beiyu, Senior Chief at the Public Relations & Corporate Advertising Department of Mitsubishi Electric (China) Co., Ltd. says that many of the participants come back each year. "The number of people who truly understand and love this event, and take part every year, is growing. I think that’s fantastic," she said with a smile.

She also recalled an elderly gentleman at a previous edition of the event who ran three laps because the more he ran, the greater his contribution to the environment would be. "The efforts of those who think seriously about the environment and ran as far as they could have manifested in the form of trees. We planted some trees in Shangri-La, and I went back some time later to have a look. I was surprised and thrilled to see how much they’d grown. It’s on its way to becoming a forest!" 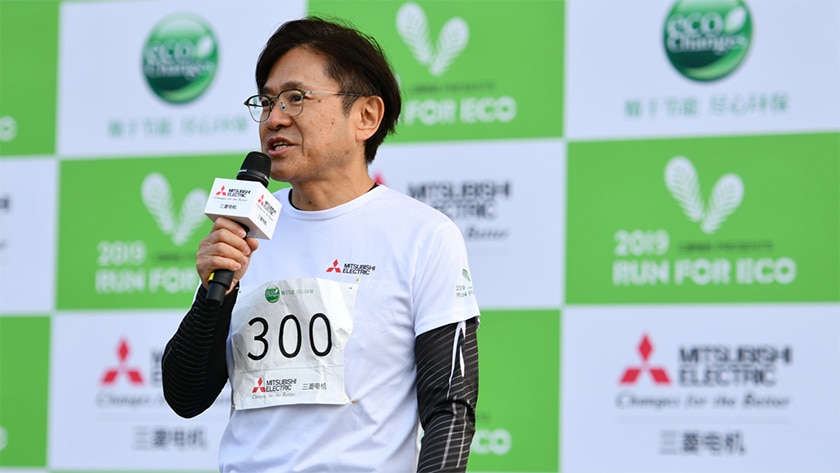 Effort and Ingenuity Today Make for a Greener Tomorrow

Mitsubishi Electric’s quest to become a global, leading green company is encapsulated in its environmental statement, "eco changes for a greener tomorrow." The key is that changes begin with people, and not just at the corporate level. Everyone is capable not only of deciding to help, but of making an important contribution that can actually impact the future.

Mitsubishi Electric (China) Co., Ltd. Chief Representative Katsuyuki Tomizawa echoed this sentiment in his closing remarks at the 2019 event. "The number of applicants reached an all-time high in only half a month. This also tells us that everyone has a deep understanding of environmental preservation, and we’re happy that so many partners are participating."

Mitsubishi Electric provides solutions and products in China, as in other countries, in response to energy and environmental issues. But as Tomizawa reminds us, Run for Eco is not simply a matter of Mitsubishi Electric providing a solution. "The contribution of all participants constitutes an important contribution to the environment. We’re grateful for everyone’s running spirit!"

Towards a Sustainable Society – The Engineers of Tomorrow Gather for the Mitsubishi Electric Cup
Embracing Differences and Tackling Challenges Together
Parasports Bring a New Sense of Unity to the World
How Can Trains Use Energy More Efficiently to Keep the City Running?