How does one recreate a clear blue sky using just lighting? It is an immense, technologically challenging task that up till now was believed to require a fixture with a thickness of at least 30 to 70 cm — a design that would make it all but impossible to use in any room with a standard ceiling height. However, Mitsubishi Electric has achieved the impossible: an LED skylight with a thickness of 12 cm or less (that’s less than most ceiling lights). Not only that, it’s also capable of producing a skylight effect with a real sense of depth and no shadow blurring. Achieving a healthy work-life balance — a concept that has spread to countries around the world — has become one of the primary social goals of the 21st century. This has resulted in an urgent need for companies to allow for a variety of alternative workstyles such as working from home, while also providing a friendly work environment that can boost employee morale and bring out the best in each employee.

It all sounds very promising, but in reality, most offices today feature the same monotonous designs. To make matters worse, air conditioning is often kept to a minimum to cut electricity costs, while windows are covered with blinds to prevent dizziness from prolonged exposure to refracted natural light — choices that can make an office feel as cramped as a vault. Employees who work indoors are forced to spend most of their days in these stuffy environments, affecting their productivity. Since the alternative is to build costly new offices that are brighter and more open, there is a real need for solutions that can create a virtual sense of brightness and openness.

This is where Mitsubishi Electric’s revolutionary new technology comes into play. It is a lighting solution that the company released in 2018, which replicates the deep blue hue of a clear sky. Using this technology, offices can emulate natural sunlight and openness in a way that was not possible with previous LED lights. 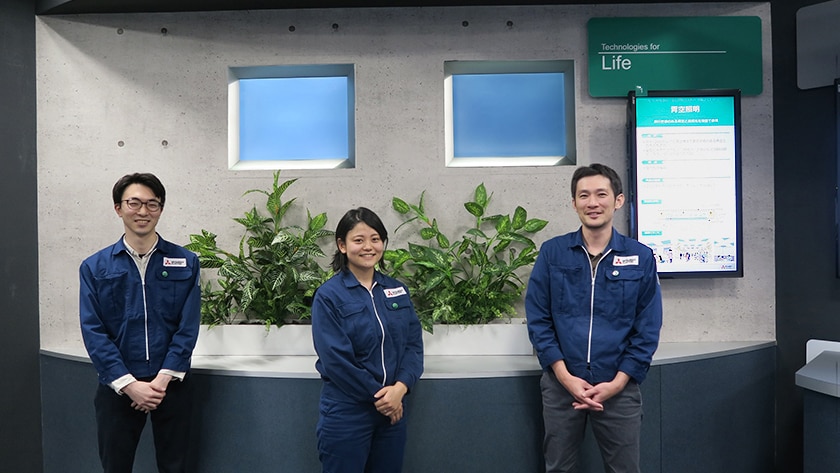 The blue skies that are seen on a clear day are produced by what is known as Rayleigh scattering — the scattering of light by particles in the Earth’s atmosphere that are smaller than light waves. Because blue light waves are shorter than red light waves, they are scattered towards us more strongly — this is why the sky looks blue when looking up during the day.

Mitsubishi Electric’s LED skylight uses the same phenomenon to artificially replicate the sky’s deep blue quality. The fixture is composed of a slim sky blue panel and a four-sided frame. Of the four frames, only three are illuminated at any given time, while the fourth remains dark as if the light were entering at an angle — an important detail that creates the illusion of actual sunlight pouring in through a skylight. Thanks to this technology, one can remain in a closed room and still enjoy the sensation of looking up at a deep blue sky.

Achieving this effect was not easy. Back when the idea was conceived, Mitsubishi Electric’s R&D team was located in Nagaokakyo, Kyoto, and they were determined to reproduce the typically bracing autumn skies of Kyoto for the initial prototype. They worked hard to discover a way to replicate the way natural sunlight enters a room through the ceiling.

An LED’s equivalent of the Earth’s atmosphere is a scatterer embedded within the light panel. As long as a focused beam of light from the light source hits the scatterer, it should come out looking close to a natural sky blue. However, because past technologies required ensuring a significant distance between the light source and scatterer, incorporating these would have resulted in a very thick light fixture. To achieve a slim form, Mitsubishi Electric decided to apply edge lighting — the illumination used in the backlights of LCD TVs. Using this technology made it possible to attach light sources to both sides of the panel, allowing for a slimmer form.

Lighting That Changes Over Time

Mitsubishi Electric’s LED skylight works as well as it does because the company’s R&D team made sure to faithfully reproduce every detail related to sunlight passing through an overhead window. You can see it in the way the light changes from morning to noon to evening — even the light at dusk and dawn is faithfully recreated. This is accomplished by adjusting the level of light emitted by the various colored LED light sources in the fixture.

Mitsubishi Electric initially expected demand for this virtual skylight technology to be highest among windowless offices, underground commercial spaces, hospitals and daycare centers, but now demand is expected to come from offices, too. This — along with the recent trend for green offices — seems to indicate that corporations are coming around to the idea of fundamentally transforming the work space. The company expects demand for this technology to continue to increase, thanks to employers seeking to provide more comfortable work environments for their employees.